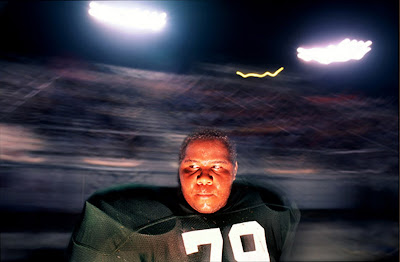 It was around this time in the summer of 1985 that I took my first fulltime staff photographer job at The Griffin Daily News in my hometown of Griffin, Georgia. This means that I have now made my living as a fulltime photographer for 25 years. I stayed at that first job for about 2 years, until 1987, and have been a freelance photographer ever since, except for a short stint as a staffer at the short lived sports newspaper, The National Sports Daily, and a few temporary fulltime staff assignments at The Atlanta Journal & Constitution. So, even though I have worked very hard at my profession over the years, I have basically gone most of my adult life so far without having a real, fulltime job. I figure that this is probably for the best, because other than my parents and football coaches, I guess I have always had a bit of a problem with people telling me what to do.

What does all this have to do with lighting? Not all that much, I guess, except for the fact that learning how to light has helped me in some ways to live my life thus far pretty much on my own terms.

The photography business has taken me places, shown me things, introduced me to people (including my lovely wife, who I met on an assignment), and allowed me experiences that I only dreamed of when I was younger, experiences that I never could have had in any other business. For that I feel very fortunate and grateful, and I hope that the next 25 years will be much the same.

In 1995, as sort of a 10 year remembrance of my first year at The Griffin Daily News and a 20 year remembrance of my senior year season of playing football at Griffin High School, I went back and photographed a high school football game there, coming away with the photo above. High school football was one of the things I loved most when I was a staff photographer just starting out; I loved walking into the stadium on Friday evening to the aroma of cigars and popcorn, getting a hot dog and a Coke, and then shooting the game. I shot this photo while roaming the sidelines - it is not a posed portrait, I shot it as I was walking by the player. I was using a Vivitar 283 flash with an off camera sync cord, holding the flash low, below the camera, and balancing the background light by metering through the wide angle lens (probably a 20mm or a 24mm) on the Nikon FM2 that I was using. I don't know what the exposure was, I don't really keep up with that sort of information in a situation like this, but I would guess that it was around f5/6, at about 1/4 of a second, on Fujichrome 100 transparency film. I shot a frame of the player and moved on, I don't know if he ever even noticed me...
Posted by Greg Foster at 12:51 PM