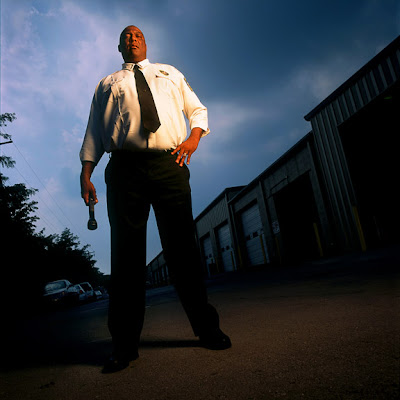 This is the anti-"WHERE IS LEBRON JAMES GONNA GO?!" story. This is the flip side. On the same day the world awakens to the momentous news of where LeBron James will take his basketball skills, with gnashing of teeth and heads bowed in Cleveland, and literal dancing in the streets in Miami, Mel Turpin is found dead of an apparent suicide at his home in Lexington, Kentucky. Mel was a star basketball player in college, at the University of Kentucky, but didn't find the same great success in the NBA. I was assigned to photograph him for Sports Illustrated in 2004, for the Where Are They Now issue, and when I saw the news of his death this morning it knocked me back in my chair.

I met him at the automobile dealership in Lexington where he worked as a security guard. Security guard? An ex-basketball star? That's one you don't hear all that often, especially for someone who, although not a huge star, played several years in the NBA and had some name recognition. I wondered what he would be like, whether he would be surly and impatient, like some of the people I deal with. He pulled up in a modest little compact car, all nearly seven feet of him. I'll never forget watching him uncurl himself from the interior of that car, little by little, until he towered over me and my assistant on the hot black asphalt of the parking lot. He was smiling from the beginning, affable and easygoing, talking with everyone who crossed our path. We did his portrait at a spot I had found earlier, he rounded up a security guard patrol car for me to use as a prop. One of the great things about shooting for the Sports Illustrated Where Are They Now issue is, as a sports fan, you get to hang out with the old time sports stars and heroes, get to chat with them a bit between shots and talk to them about when they played. Mel talked a little about basketball, he seemed to have enjoyed his time playing and seemed content with having moved on to a basic and middle class life back home after being famous. He said he still had lunch with his old college coach, Joe B. Hall, every Sunday at a local cafeteria. I tried to make him look imposing and dangerous, like a big security guard should look, and he obliged me and stopped smiling for a few minutes. He did everything I asked of him for the hour or two we were shooting in that sweltering June Kentucky heat, and then he shook my hand and smiled and went into the dealership to go to work. Thus ended one of my favorite assignments ever.

Every once in a while in my business, you photograph someone who, although famous, makes you feel like they are instantly your friend, and that was the case with Mel Turpin. Since that shoot in 2004 I have occasionally thought about him, wondering if he was still patrolling around that Lexington dealership, watching out for trouble, smiling at those he met. Apparently he had some things going on that were bigger than his outward smile, and that is a shame. All you have to do is read a few of the articles already written on his death, and you will see that many people saw him the way I did, a friendly, smiling, seemingly happy giant of a man, content with his place in the world, despite his lack of riches and NBA superstardom. Maybe that was not the case, we might never know. However, here on LeBron mania day, it kind of makes you wonder about priorities, doesn't it?

(Since this is primarily a lighting blog, I should say that the portrait shown here of Mel was lit with one medium Chimera softbox, with a warming gel on the Dyna-lite flash head, which was connected to a Dyna-lite 2000 watt power pack. It was shot with a Hasselblad with an 80mm lens, on Fuji Provia film, with the exposure probably about f/11 at 1/500th of a second.)
Posted by Greg Foster at 7:37 AM