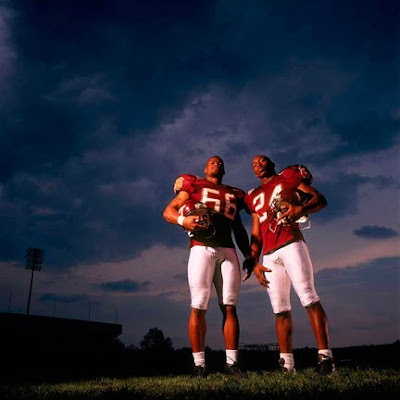 I was driving down Interstate 81 in Virginia yesterday when I passed the exit for Blacksburg, the home of the Virginia Tech Hokies. As I was looking over at the mountains to my right, I thought about a shoot I did at the school for Sports Illustrated back in April of 1999. The assignment was to do a portrait of Frank Beamer, the head football coach, and have him in the middle of a swirl of activity and motion created by some of his players.

The day before this shoot I was in Chapel Hill, North Carolina, doing some still life photographs at the University of North Carolina for a story on Objects of the Millenium, also for Sports Illustrated. After finishing up photos of UNC Women's Soccer National Championship trophies and game balls, I drove to the Greensboro Airport to pick up my assistant who had flown in from Atlanta, and we headed north to Blacksburg to check into the hotel. A few hours later I was checking right back out, as I discovered a bunch of teenagers, there for a swim meet, running loudly through the hallways. I managed to find a more quiet Hampton Inn across the interstate, and finally got to sleep, very late. The next day I went back to the previous hotel to pick up my assistant; he hadn't even noticed the commotion and had no idea I had left.

We headed over to the athletic department to location scout, and I went into the empty stadium to have a look around, but found nothing that worked - stadiums are not always the best backgrounds for the type of work I like to do. We then went across the street to the practice fields, and found an area that had a clean background, and just as importantly, AC power. As we were finishing setting up the lights, Coach Beamer came out with some of his special teams players, guys who were on his punt block team, and we photographed them from several different angles, covering what the magazine was looking for (more on the results from that part of the shoot, the ensuing mini-firestorm, and the two double trucks and several other photos that were used over the course of two issues, in a later post.) As the shoot progressed, the clouds had begun rolling in and the winds picked up, and we wound up racing the rain that seemed to be coming. After finishing the main photos, I wanted to take advantage of the great texture in the sky and do one more portrait, so I asked for two of their standout players, Corey Moore and Larry Austin, to pose for a few more minutes. In a situation like this I always like to protect the equipment, so we had the rental car right beside us, trunk open, so that we could quickly throw the more delicate equipment in if the rains suddenly came. I used a bare bulb Dyna-lite head with a bit of warming gel, plugged into a 1000 watt Dyna-lite pack. I like the hard edge the bare bulb head gives, and sometimes it's good not to have a softbox to break down in case of a sudden thunderstorm in the middle of a practice field. I also put a second light, a little Vivitar 283, on the ground to camera right and slightly behind the players, connected to a Quantum battery pack, to give a bit of an edge of light on the shadow side of the players. I was firing the Vivitar with a Wein ultra slave, plugged into the flash unit with a sync cord. I spot metered the changing sky with a Nikon FM2, and underexposed the ambient a bit to make it more dramatic. Even though it looks like a late evening stormy sky, it was actually in the middle of the afternoon. We got off a quick roll or two of Fujichrome Provia with the Hasselblad, using the 80mm lens, and managed to pack it all up before the storm.

A few minutes later we were rolling down Interstate 81, towards the Greensboro Airport and the plane ride home to Atlanta, and Coach Beamer and his Virginia Tech Hokies were rolling towards the National Championship game with Florida State in the Sugar Bowl, which they lost 46-29.
Posted by Greg Foster at 5:51 PM